Back to basics: The pipeline

Here we go again! Another Power The Shell blog post.

Today, let’s go back to basics ! We’ll talk about the pipeline. If I read the definition in a dictionary, it’s common sense for another people out of the PowerShell business that it’s something that is transporting gasoil from one point to another. Well, it’s not as far as PowerShell idea of pipeline, the main change is that in PowerShell objects are passed through the pipe (we’ll call it the pipe from now on, easier to say, and less letters to type).

In all versions of PowerShell, pipe the return of a cmdlet the simplest task ever !

How does it work ?

But now, how do we treat each values passed down the pipe, how can retrieve theses values to play with them ?

This is where the $_ variable show her face. This variable will contains the value of the current piped object, it means all, properties and members are available. But this nothing is not enough. You will have to tell PowerShell if you want using the Where-Object or the Foreach-Object cmdlet ! The Where-Object is more likely a filter which will gather results match the value. The Foreach-Object is the opposite, and you will start an action for each piped values, examples.

But, how is it working if we pipe multiple object into multiple pipes ? Even it is possible ? Let’s try this !

Ok, this is working quite good, but how does this works ?

Let’s use quick customs functions (Thanks to Laurent Dardenne for theses functions) to check this out ! 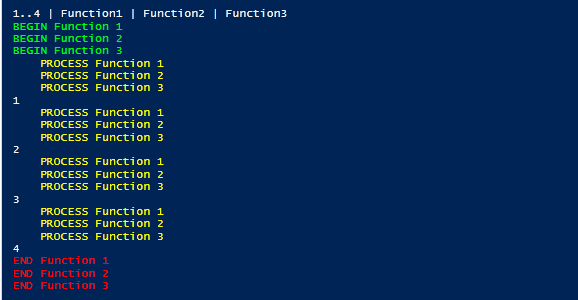 Since PowerShell 4.0 you can bypass the pipe, but you can also stop using $_ variable. Properties are available directly with their names.

Thanks PowerShell team product for this awesome stuff, but there is more again ! Now you don’t have to use pipe yet. Where-Object and Foreach-Object became methods of cmdlets used as an object !

There are limits to that system, but it’s clearly a great idea, because don’t loose focus, in Powershell EVERYTHING is an object  and can be piped !